Having read about Klecksography all those months ago, I just had to have a go myself. I remember doing ink blots as a child and showing my own children how to do them, but hadn’t really ever turned them into other drawings.

First I tried the standard art of dropping some ink of different colours onto an A2 sheet of paper, then folding in half and smoothing down. When using paint I remember that the viscous nature of paint produced wonderfully veins on the surface where the paint parted. This doesn’t happen with ink, however the colours do blend beautifully. Here are two that I subsequently drew on with pigment pen liners.

Other interesting patterns that I will make into other insects at some point include the following.

I then tried making ink blots by placing another piece of paper over the one with the ink on, rather than folding the paper in half. This gets rid of the crease but you do lose the symmetry (although you do gain a mirror image on the second sheet). I went a bit over the top with these, and tended to use a lot of black ink. One I developed into an image of my dog for a previously published post for part 2, project 5.

Others (a select of the many is shown below),  I have yet to turn into drawings. I am not sure what I see in them so am keeping for future inspiration.

The last experiment that I did was to lay some wet sheets of paper underneath a vase of Oriental Lilies that I happen to have on the table. The Lilies were just at the point of dying and the petals had started to fall along with the anthers covered in bright yellow pollen. Knowing how the pollen stains everything a sunset yellow I thought I would capture it where it fell and use the resulting accidental marks. However,  the results were really boring The pollen did stain the paper, but not a vivid colour the way it stains cloths or the table!!! The result is rather a mess, but you never know when it may come in handy!! Interestingly the camera has picked up a faint pink tinge that isnt’ really visible when viewed directly! 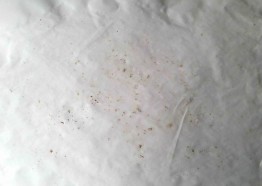